One of the most dismaying things you discover if you study Finnish long enough is that the extremely morphologically complex and otherwise utterly alien-sounding language you have been melting your brains to get a tenuous grip on is, in fact, textbook Finnish, the literary language or standard language (kirjakieli) used in newspapers, magazines, and books, and spoken, as it were, by TV and radio presenters, politicians, schoolteachers and other professionals, and government clerks.

In real life, Finns speak bewildering combinations of conversational Finnish (puhekieli) and regional dialects (murteet). In Helsinki, the local dialect or argo is stadi (the word itself is a Finnish take on the Swedish for “city,” stad), a mind-numbing melange of Swedish, German, Russian, and English loanwords embedded in a Finnish grammatical, syntactical, and morphological matrix.

When I run head on into something that looks like slang or conversational Finnish, I often turn to the website Urbaani Sanakirja (“Urban Dictionary”). One of the things I like about the online dictionary is that it almost always provides down-to-earth examples of usage.

The website also features a Päivän sana (“Word of the day”), helpful for building and reinforcing your Finnish slang vocabulary.

Today’s word of the day is a personal favorite of mine, dösä, “bus.” 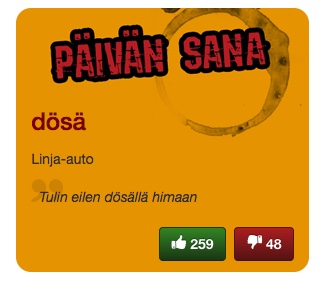 Although Finns also often use the word bussi (“bus”), it is a colloquialism; the word for “bus” in standard textboox Finnish is linja-auto, the very same word Urbaani Sanakirja uses to define dösä.

“I laugh at the haters all the way from home to the bank.”

That is a slightly obscure sentence (at least, to this non-Finn: is it a peculiar Finnish way of saying, “I’m laughing all the way to the bank”? Who are the “haters”?), so let’s look at the second example provided. It, on the contrary, is a perfectly clear and typical specimen of conversational Finnish with a bit of slang tossed in for good measure.

If you find this confusing, you’re not alone. In conversations with actual Finns, I rarely venture beyond the bounds of my still quite shaky kirjakieli, although often as not what I hear in return is conversational Finnish or the Karelian dialect of Finnish, spoken in parts of southeast Finland (where I hang out) and once spoken in Finland’s former second city, Viipuri (Vyborg), and the area to the south of it, known in Finnish as the Karjalankannas (Karelian Isthmus), but usually called simply Kannas or “the Isthmus” by Finns.

For obvious reasons, Kannas is a charged word in Finland, but that is a topic for another, less frivolous post.