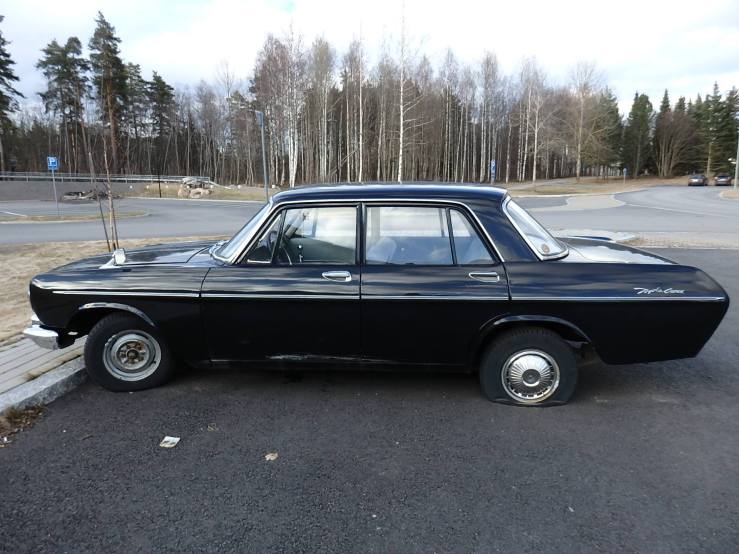 Some of you may remember my previous accounts of my dream car, a 1960s Toyota Crown that has been unaccountably parked outside the Prisma hypermarket across the street from our house in Linnala, Imatra, E-K, since that temple to Satan and lucre opened its doors to Russian cross-border shoppers a couple of years ago.

The condition of the dream car isn’t improving. Now it has at least two flat tires and what appears to be a bad paint scratch on one side.

It also seems that a rival for the dream car’s affections has emerged, a certain Petter, who left a hand-scrawled note, pinned down to the windshield with the wiper blade, in which he pathetically asks, “Is it for sale? If you’re selling call 044 524 7719.”

Since the note is still there, I gather no one has called poor Petter, making me wonder whether the dream car’s owner is still among the living or the mentally competent.

Be that as it may, I have to have the car. What I will do I with it? I will give people free rides in it, especially the refugees living in an ex-hotel on the other side of the river. As it is, many of them make the trip to the stores (all of them are on our side of the river, and they’re way more than we need) by foot, which must take them a couple of hours at least.

Why do I deserve the car? Because I fought the law and the law won. Many times. And because I lent your sister that dress that made her the belle of the ball at the prom in 1991, even though she’s a pretty average looking gal.

So you send me your email address, and I’ll send you a bill for whatever contribution you’re willing to make via PayPal, and I’ll be one step close to sweeping the dream car from out under the nose of that pesky Petter.

If you think I’m kidding, you don’t know me very well.

The alternative is to buy the car with the Kekkonen sticker on the back window. But that car seems to have a mentally competent owner who drives it all the time, except she or he thinks it’s “a laugh” Urho Kekkonen was president of Finland for like six hundred years, even though the country is celebrating its 100th year of independence only this year.